How to Create and Use Business Intelligence with a Data Warehouse

Business intelligence (BI) is a data-driven decision support system. BI’s purpose is to hold comprehensive knowledge about the factors that impact an organization—its customers, its competitors, its partners, its internal operations, and the macroeconomic environment—and make it available to business stakeholders.

Business intelligence encompasses data gathering and storing, knowledge management, and analysis to provide input to the decision-making process. Unsurprisingly, setting up a panopticon like that requires a lot of data. You could say that the emergence of big data technologies has enabled the modern conception of business intelligence.

Data typically moves through several layers of the BI stack before being consumed for decision-making. First, data gets captured in a batch or via a stream. Second, this raw data gets stored in a data repository optimized for analytical loads, usually a data lake or an enterprise data warehouse. Third, data gets remodeled into one or more tables. Fourth, a visualization or reporting tool consumes these ready-made tables.

In this article, you’ll learn about the potential of business intelligence and the tools you can use to set up a modern BI stack.

Sales trackers are an organization’s most popular internal report. Managers use them to evaluate the sales team’s efforts and, potentially, to calculate individual or team commissions. Usually, their reports are based on data that gets extracted from operational systems, such as an enterprise resource planning (ERP) tool or an online transaction processing (OLTP) database. First, most organizations own this data and have it on premises. Second, extracting data from them is relatively easy. On top of their business value, these two considerations ensure that sales trackers are high on the priority list.

Marketing reports and dashboards have also gained prominence in the past couple of decades. Before, marketing efforts were often quantified with hypothetical figures about reach. With the advent of the digital age, marketing budgets shifted toward digital channels. These channels have a data trail as a byproduct, which organizations can tap into for BI purposes. Typical marketing reports are built around return on marketing investment (ROMI) to evaluate individual campaigns, channels, and audiences. More advanced techniques use machine learning–driven attribution models to assign each conversion to one or multiple channels.

Typically, software companies have a product dashboard that visualizes how users engage with their products. It answers questions about the recent feature launches; the most popular features; the number of daily, weekly, or monthly active users; and so forth. Modern tracking tools allow software companies to track every click or tap to gain insights into how their users engage with their products. It is an essential prerequisite for delivering continuous improvement.

What You Need for Business Intelligence

In most situations, the consumers of business intelligence are internal stakeholders. They consume BI efforts via standardized reports, dashboards, or ad hoc analyses. This section outlines the tools and roles that work in tandem to produce these analytics products. 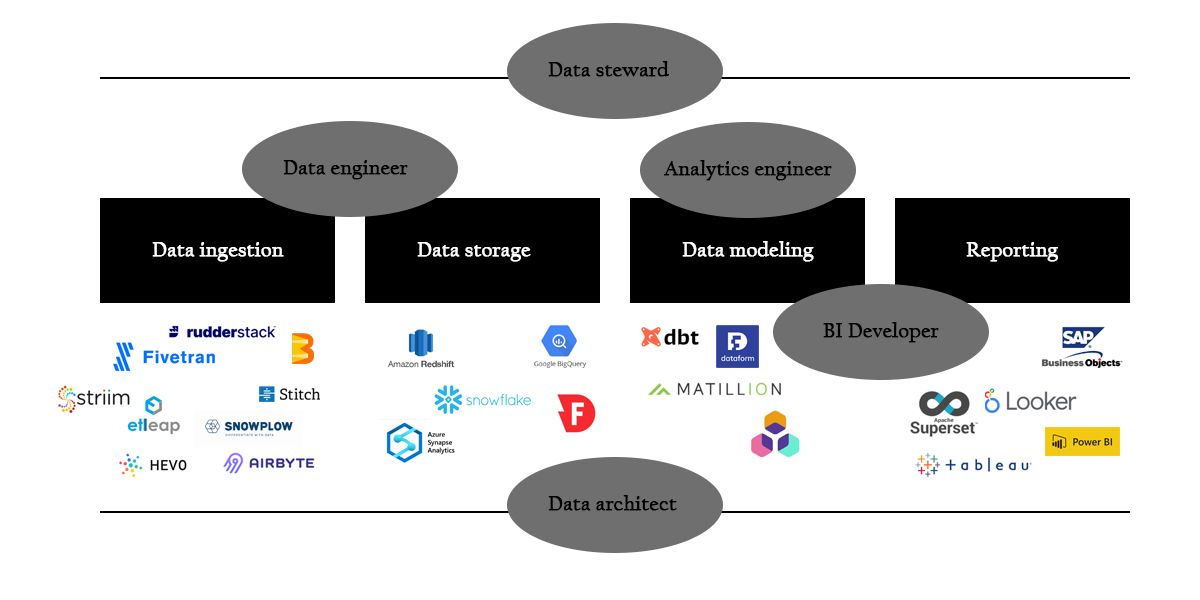 There are various approaches to organizing analytics capabilities in an organization. Typically, companies with limited analytics maturity have a decentralized model, where each department is responsible for its own business intelligence, or none at all. On the other hand, companies with a proven history of analytics initiatives tend to adopt a more centralized modus operandi or have a center-of-excellence approach with a dedicated team that focuses on business intelligence for the entire organization.

Nevertheless, the workflow for turning data into an analytics product isn’t necessarily contingent on the operational model. That’s because, at its core, every operating model requires the same kinds of roles and technologies.

Good BI teams don’t try to do everything by themselves. On the contrary, they deliver the insights that the business teams have prioritized. Often, BI teams have business analysts or product managers to interpret and translate business requirements. However, a BI-focused product role probably won’t be available in organizations with a decentralized operating model. In that situation, business people work closely with the analysts in their team.

What happens next is highly dependent on the availability of the needed data to produce the required insight. Analysts or BI developers can quickly build the requested interface if all data exists and is exposed.

But what if the data isn’t available? In that case, many people act as cogs in a well-oiled BI machine to get from data to insight, with a mix of several possible roles involved.

With so many people and processes involved, it’s clear that the end-user interface is only the tip of the iceberg. There often is a well-orchestrated undertaking behind every enterprise report or dashboard.

Most analytics products require the interplay of a variety of tools. This section outlines the necessary tools for setting up a modern BI architecture. Such an architecture must take the following into consideration:

Data ingestion tools are very contingent on the source system. There are many ways to categorize these systems, but the following categorization should cover most use cases:

Before the rise of cloud computing, most organizations built BI stacks around OLAP cubes. Raw data was kept in their source systems or as blobs in storage, such as data lakes. Specialized teams maintained ETL (extract-transform-load) pipelines to transform and aggregate the data into a memory-efficient form so that the end user could slice and dice it as they pleased.

Although we refer to these memory-efficient analysis tools as OLAP cubes, they support more than three dimensions. However, as they were maintained on premises and limited by their hardware constraints, ETL teams constantly had to balance business value against memory limitations.

However, the world has come a long way from SQL Server, SSIS, SSRS, and SSAS. Due to the decoupling of storage and computing power, modern data warehouses, such as Google BigQuery and Snowflake, lend themselves to an ELT (extract-load-transform) approach. Data warehouses have become both a data sink and a reporting layer. Only a modeling tool (infra) separates these two phases. The following are some of the most popular data warehouse solutions and their distinguishing features:

Landing data is one thing. Serving it for BI and machine learning purposes is another. Many organizations rely on classic data warehouse tools to produce their trusted data sets: materialized views) and scheduled queries. However, there are alternatives. These tools abide by best practices from software engineering, such as version control and CI/CD. Their stellar rise gave birth to the subdiscipline of analytics engineering: the practice of transforming, testing, deploying, and documenting data.

The final layer in the BI stack is reports and dashboards. Because these tools are omnipresent in the decision-making process, many equate them to business intelligence.

This article outlined why your organization should utilize business intelligence and set up a BI stack. The roles that are responsible for working with and maintaining the BI stack are as follows:

These roles will focus on one of the following four BI layers:

Finally, we’ve summed up over twenty tools in these four layers.

Get the Data Maturity Guide

Our comprehensive, 80-page Data Maturity Guide will help you build on your existing tools and take the next step on your journey.

Build a data pipeline in less than 5 minutes

Get a personalized demo

Collaborate with our community of data engineers