Do more with your data 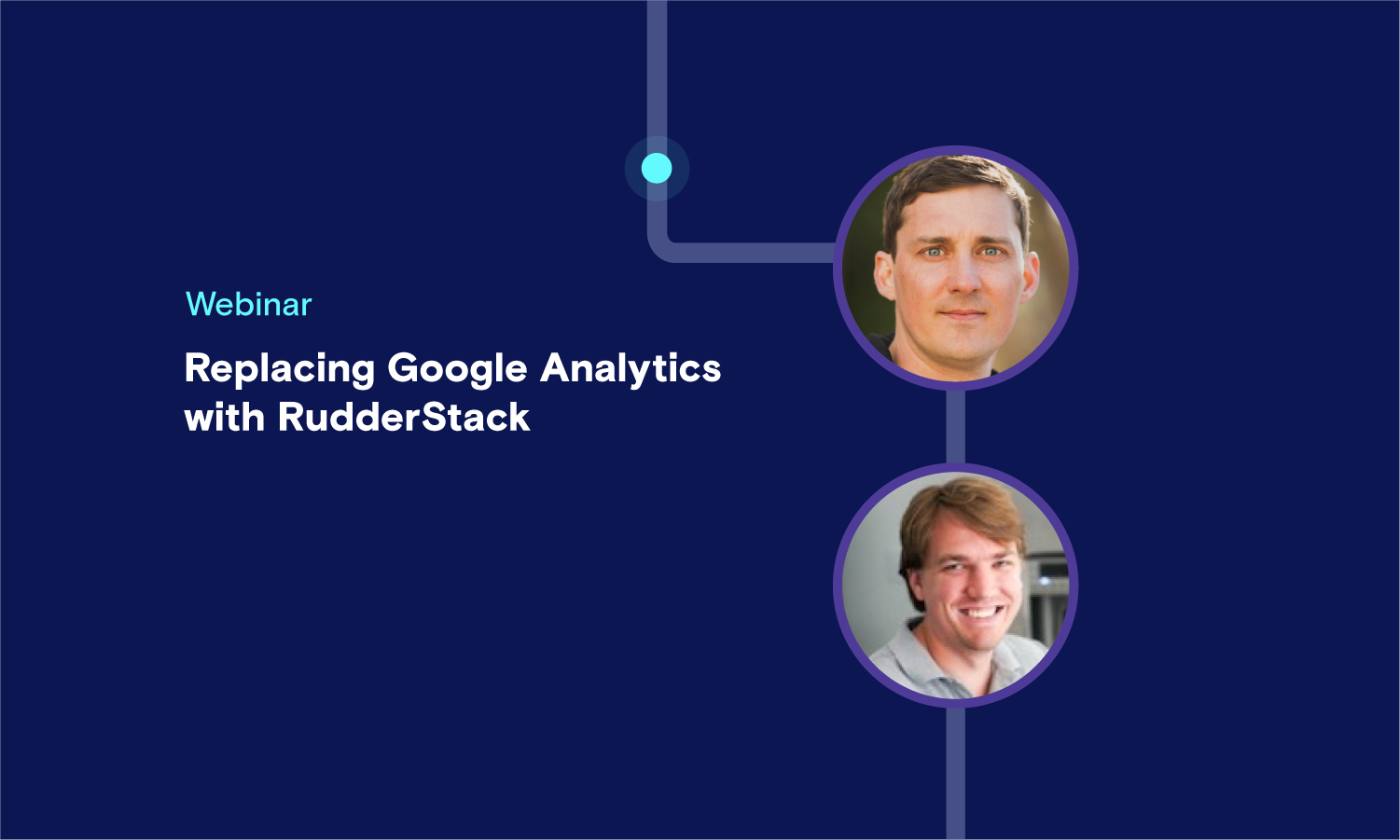 Google Analytics allows you to drop in a script and immediately get value out of the box. It’s a helpful tool, but its limitations are quickly apparent to those of us who want to do more with data.

In this webinar, Eric Dodds talks with Alex Dovenmuehle, an experienced data engineer and consultant with a background working at startups like Mattermost and huge businesses like Heroku. Alex details the limitations of GA, highlights the advantages of warehouse first analytics, and then he shows you how to leverage RudderStack to replace Google Analytics.

Here's what Eric and Alex cover: 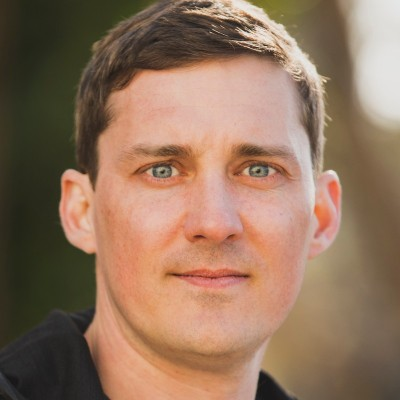 Eric leads growth at RudderStack and has a long history of helping companies architect customer data stacks to use their data to grow. 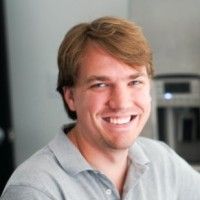 Alex is obsessed with driving business impact with data and automation. He's always looking to create automated and scalable business processes, supported by software and data, that allow businesses to scale their operations.

We're going to talk about how to migrate to RudderStack to replace GA. So Alex has done this multiple times, so he'll talk us through that. And then really, I think the most exciting part is unlocking the ability to track a full customer journey with the data you get through RudderStack. And then we'll wrap it up by talking about tracking ad campaigns and conversions, you can get some really, really detailed reporting on cost per acquisition, by the campaign, even down to sort of the ad level if you want, which is cool.

Quick introductions. I will give Alex a monumental introduction. But Alex and I met, gosh, almost a year ago now before I joined RudderStack, and you were at Mattermost, and you had joined Mattermost, you'd been there, I guess, a couple of months after coming from Heroku and did the whole RudderStack rotation at Mattermost, and now you run a consultancy called Big Time Data, where help people build out their data stacks, any important points that I missed about ...

No, I think that's it. I would say that our main thing at Big Time Data is just that, what we came to realize is like, everybody really has all the same problems with data, understanding it, getting the value out of it. And so we, me and my co-founder met at Heroku, we moved to Mattermost, built all that out at both those places and then at Big Time Data, we're just kind of taking that show on the road. And like, we just want to help everybody make sense of their data and really unlock the value of it.

Awesome. And I am Eric, Director of Customer Success at RudderStack. And let's dive into it. So Google Analytics limitations and use cases, this is probably a really familiar view to anyone who's used Google Analytics. And it's kind of funny, I just pulled an image from Google image search and of course, Neil Patel is like the top image search result. Makes sense. He's like the SEO, optimization master.

Okay. I'm going to start and do the first couple of bullet points here, and then let you take it over Alex. So first of all, Google Analytics is not really good for user level views of data. Now, we'll talk about GA4 in a minute, but you're mainly looking at aggregate data. Of course, you can sort of drill down into the data a little bit and look at events, but in terms of tracking an individual's customer journey, or getting deep sort of attribute level information, Google Analytics just doesn't really do that. And the limited functionality it has isn't that helpful, at least for moderately complex use cases. And raw data. Actually, Alex, you want to talk about this? Because I think you've felt the pain of this.

Yeah. I mean, we've had some times Google Analytics. But the thing that always happens with Google Analytics is like, it provides you that initial like, oh, wow, this is so cool. It gives me sessions, and pages, and users, and stuff. But then it's like when you want to get that level deeper and start really unlocking the whole power, and we're going to go into this later, but to map all this to like your full customer journey, especially once they get into your product and stuff, not only can you not get the raw data that would give you the ability to like see exactly what that user journey was, but I mean, if you did, it's like crazy expensive. And yeah, it's just been a nightmare to deal with.

Inflexible event structure. This is really simple. So you have sort of action and label for events in Google Analytics classic, and you sort of have to align all of your event trackings to that. A lot of people track events that they're sending to other properties, sort of like Facebook or Google conversions separately than you're doing Google. And so you have multiple sorts of events happening, it just becomes really messy, and they sort of force you to align to their structure in Google Analytics classic.

And then, full-funnel reporting is complicated cross-property and cross-property applies both to Google Analytics properties, but also technical properties. So for example, we have rudderstack.com, which is our marketing site. And we have app.rudderstack.com, which is our actual app that users log into. And so having all of that data in one, Google Analytics property gets really noisy, but if you separate them, you're looking at different reports for different parts of the funnel. And so it just creates challenges, and it's pretty hard to keep clean.

Dashboarding, and custom reports, aren't that great on GA classic, we'll talk about how it's a little bit better at GA4. And then Alex, talk about when people upgrade sites or create additional GA properties, et cetera, that gets real messy, real fast.

Yeah. And so for an example of this, at Mattermost we had www, the marketing site, mattermost.com. Then we have like docs, you got support, you've got the product. We've got sort of a cloud interface just for buying the on-prem license, that's all different. And so it's like if you have to split all this stuff up in a group, all this stuff that you're looking at like you're not going to be able to really get a true grasp of what's going on across these things.

And really, like tracking them across in your marketing site, you're going to have things that link to your docs and vice versa and all that kind of stuff. So it's like, what's really going on here? Google Analytics isn't going to tell you, so that's where RudderStack's going to come in and make it a lot easier for you.

I think one practical way that this problem shows up is, you just keep dumping more and more ops time into really becoming an advanced Google Analytics implementation expert. And it's sort of a never-ending challenge, and there's a point at which there are diminishing returns. Let's talk about what Google Analytics is good at. It is great for aggregated views that individual users who want self-serve analysis can leverage. So content performance, social media teams, content teams, let's look at the time on page, the number of blog posts viewed per session, incoming traffic, and time on site from particular social channels. That's where out-of-the-box sessionization and other components like that are really, it's just really helpful.

And frankly, just really easy. You put the script on the site, if it's pretty clean and you're looking at one particular property, it's a great self-serve analytics tool for those purposes. And then the other point I would make is that, for aggregate eCommerce analytics, it's actually pretty good because they include a lot of the eCommerce spec out of the box, and they have the basic funnel built-in, you can get really advanced and there are better ways to do more complex eCommerce reporting. But for a lot of basic eCommerce use cases, it's pretty dang good for your basic funnel optimization and understanding revolves around it.

Again, the user-level stuff, you can't really get that deep, which is where you can actually sort of uncovering things like lifetime value, but for the aggregate view, it's pretty good for eCommerce. Anything else that comes to mind, Alex, that I didn't mention?

I was just going to say, I mean, we had another webinar about the data stack journey and the blog post that I wrote about it, too. And this is where like, no tool, most tools have some value. And obviously, Google Analytics does have value just like you said, in this specific case. And it honestly even has some value, again, if you're just looking for aggregate views of this stuff, it's really, once your sort of past that point on your data sector needs where it's like, okay, like cool, we have some aggregate views of stuff, things are starting to get too complicated for Google Analytics to come, like to make sense of it anymore, like what now?

And I think the, we're trying to get across here is like, once you hit that inflection point, that's like, hey, we need RudderStack. Let's use RudderStack to solve this problem.

Sure, yeah. I think there's a point at which you're asking Google Analytics to do things that it really wasn't designed to do.

Yeah. And then once you start getting into that as you said, once you start going into that, it turns into a, like you have to be some crazy ops guy and you're just pouring time into it. That's really not meant or not really getting you the value that you should be getting.

Yep. Okay, so one of the questions that we discuss a lot when it comes to Google Analytics is, but what about GA4? So here's the hot take on GA4. It's a huge improvement on flexibility as far as events go. So it tracks events actually more similar to the paradigm of sort of a RudderStack esque approach, where you have an event and then you have attributes or properties related to that event, way better there. And you can get away more detailed look at sort of specific user behaviors, which is good.

And then their custom reporting and dashboarding is way better, you can get way more details, it's just way more flexible from that standpoint. So I think what will happen with GA4 is, it will take earlier companies further in their ability to sort of leverage the tool to get insight. But there are still major challenges, especially for companies that scale or want more granular data. So you still can't get the raw data.

And then this, I think, is one of the big things with Google Analytics in general for most companies, is the data is actually still trapped in Google Analytics and can't be activated to support other business functions. So it's really just sort of a dead end, if you will, for analysis, which is fin, but once you have that analysis, if you don't have the raw data, and the ability to sort of activating that, there's a huge amount of manual labor that goes into that. And then, of course, it's actually still really hard to do the full-funnel reporting cross-property, which is sort of a fundamental challenge.

I think it's really, once you get to that place, especially for B2B kind of sass companies, especially. You have a marketing site where you're trying to convert people to sign up for your product. And then wha